Home
>
Conversion Techniques
>
Appropriation
>
Cruelty of British and their conversion Tactics
Post Views: 664
Cruelty of British and their Baptism Tactics
She is Gouramma, daughter of Chikka Virarajendra, the last ruler of Coorg. The British, by deceit, had annexed many kingdoms into their dominion. They deposed Raja Virarajendra, imprisoned him in Benares in 1834 as a political prisoner and confiscated his wealth. Later the king demanded for his wealth from the East India Company in a court in England in 1852, but in vain. When in England, Queen Victoria took Gouramma, then aged 11, under her care and baptized her, converting her to Christianity. The image attached of Gouramma, a painting by German painter Franz Xaver Winterhalter, features her in an Indian attire and holding a Bible. 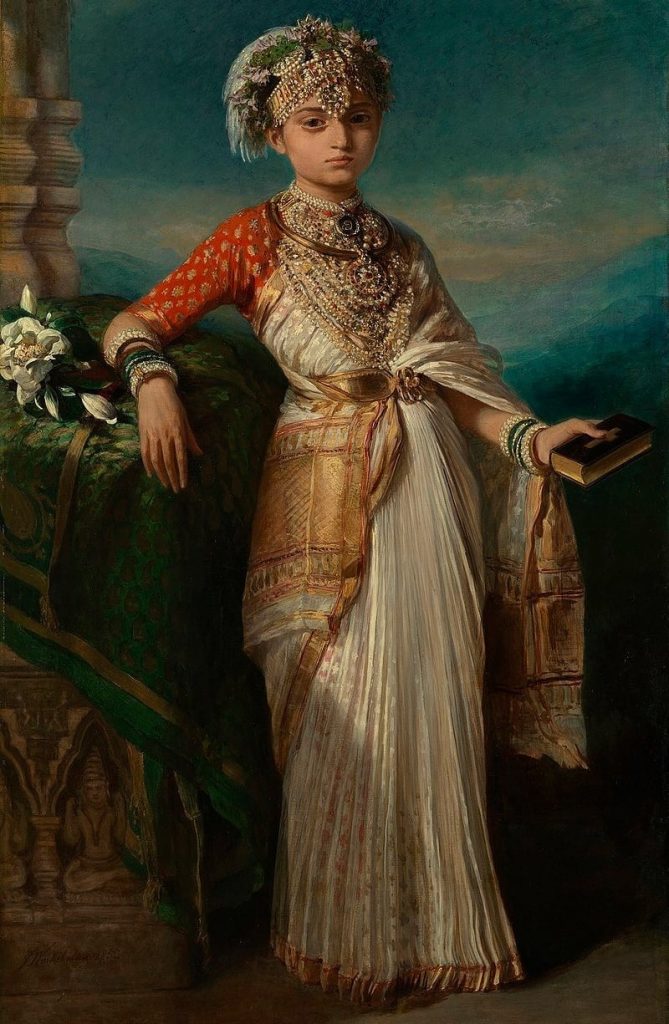 Hindus never went against Dharma. There are many examples from History. Aurangzeb had a son named Akbar who rebelled for supremacy. For some time Akbar’s children, a son and a daughter, i.e. Aurangzeb’s grandchildren, were under the care of Durgadas Rathore (who preserved the rule of the Rathore dynasty of Marwar). Durgadas had rescued Marwar prince Ajit Singh from the clutches of Aurangzeb and saved him from getting converted to Islam by the Mughal ruler. But despite knowing about the schemes and treacheries of the Mughals, he did not go against his Dharma when taking care of Aurangzeb’s grandchildren. Durgadas arranged for their education and raised them as Musalmans. He could have easily converted them to Hinduism but did not do so. Later when Aurangzeb asked for them, he sent them back to the Mughal court. Even Aurangzeb was amazed and astonished when he got to know about this act of Durgadas. But did this act change Aurangzeb? No! He remained intolerant to Hindus! Similar were actions of British. Durgadas Rathore’s story of valor of saving the Marwar throne is described in book Saffron Swords.
But what did Queen Victoria do for Gouramma? She did not let her continue to remain as a Hindu and converted her. Notice the gloom reflected in the image of Gouramma. Queen Victoria did something more cruel. She got Gouramma married to Lt. Col. John Campbell, who was already married and was 30 years older to her. Gouramma was aged 17. She gave birth to a daughter at age 20 and died at the age of 23.
Even Maharaja Duleep Singh, youngest son of Maharaja Ranjit Singh, was under the care of Queen Victoria. He was converted to Christianity before he was 15. Later when matured, Duleep Singh reconverted back to Sikhism.
There are thousands of baptism tactics and cruelty of British in the pages of History, both reported and unreported. And conversion tactics still continue in independent India, right in front of our eyes. And as usual, we watch like silent spectators, with only a counted few raising a voice.
From the Facebook wall of Manoshi Sinha; image sourced from Google.
Tweet Pin It